When I bought the Econoline it already had a mustang 302 V8 fitted unfortunately it was not quite as advertised and needed a lot of work to finish it.

Luckily the engine had been fitted with a C4 gearbox and a custom propshaft, all the bolts were either loose or missing but not too hard to remedy. In order to get the V8 to fit the previous owner had done a hatchet job and cut chunks of the floor out so the first job was to repair and modify the floor and also modify the engine cover (doghouse) to go around the much larger engine. Using the cutout sections we re-welded them around the larger engine giving a near stock finish.

The seat mounts were hanging above the manifolds so to get the stock seats to fit I swapped the standard seat mounts from passenger to drivers side which meant they were offset the opposite way and now sat on the floor. 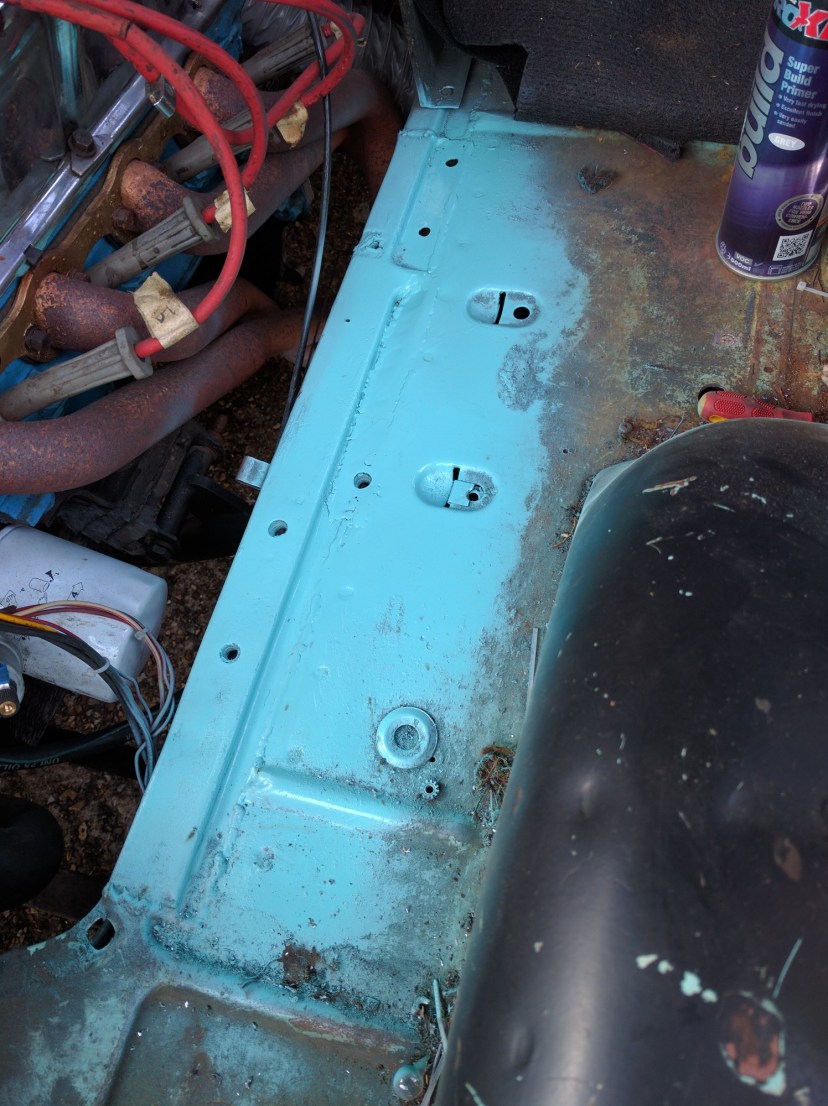 Only half the doghouse was supplied with the van and it’s pretty ropey so temporarily I modified the bits I have using some aluminium sheet to fit around the larger engine but still maintain the original lid and fit around the stock seats, I’m currently waiting on a new doghouse to be delivered from the states and when it is I will modify it properly. After this I fabricated new seat mounts from thick steel spacers and M10 bolts which I welded in place I also welded in seatbelt mounts. 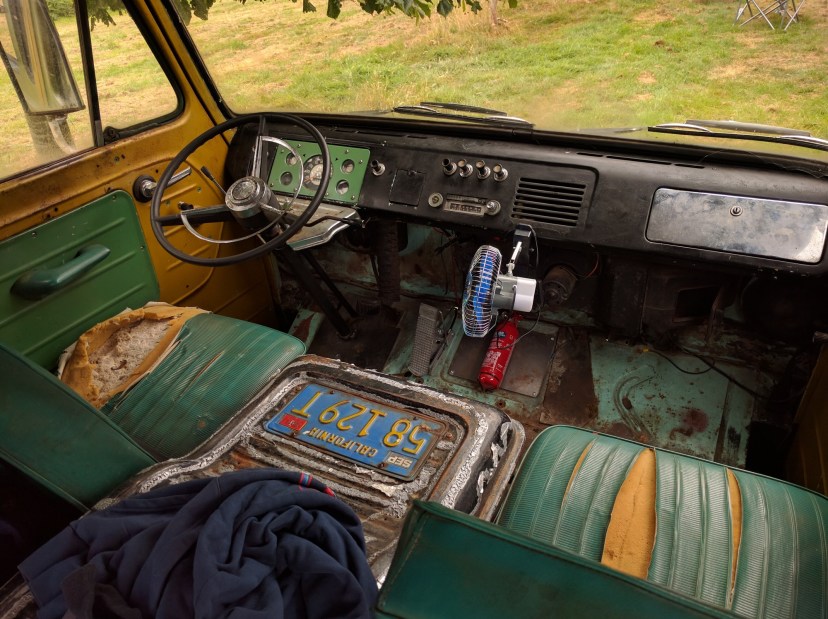 The next job was fitting a shifter, when I bought the van it had a steel bar welded from the column shifter to the C4, it was so badly made that it fell apart the first week I drove it so I swapped this for a cable, fitting a B&M shift arm to the box and using a custom 10′ cable to the column shift, this worked allot better however there was a lot of play in it so after a while I sourced a dodge A100 dash shifter which looks great and has nearly the correct shift pattern for the C4. P, R, N, D are all in the correct place (10mm throw between each) however 2 is between D and 2 and 1 is where 2 is as the last two gears only have a 5mm throw. 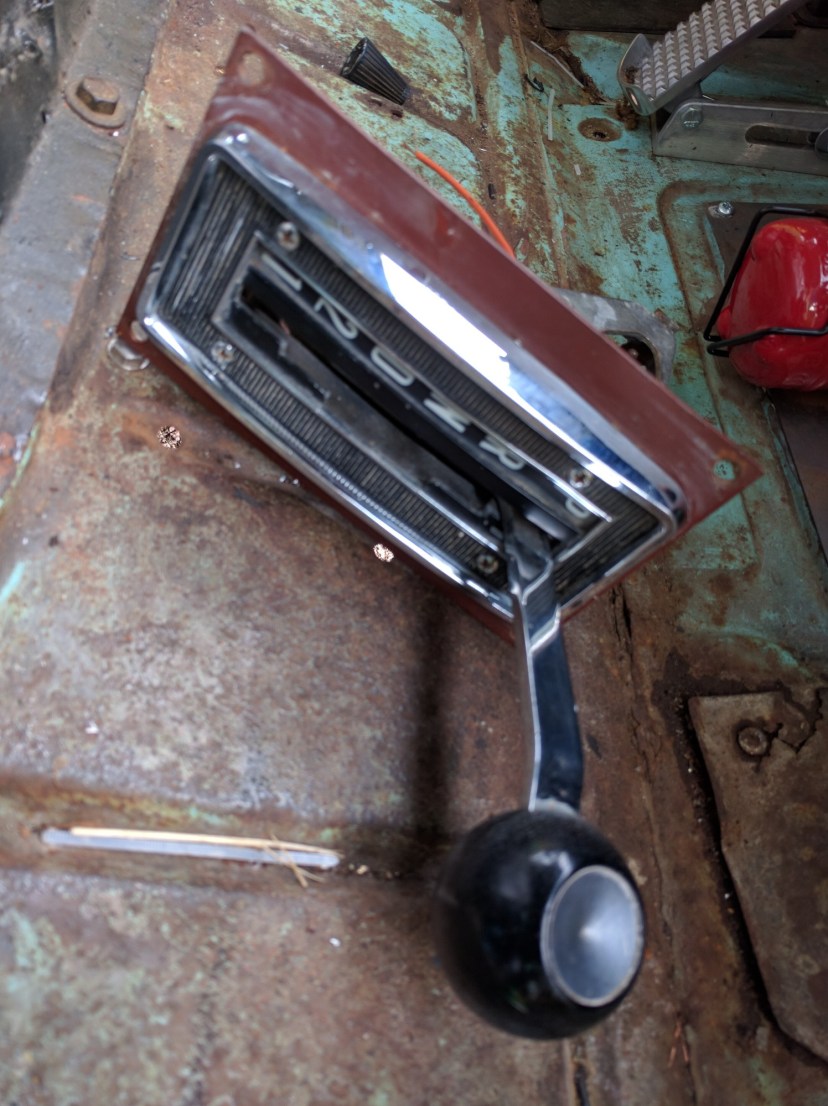 I mounted this to the front of the doghouse with a fabricated box and extended the cable mounting bracket to accept the custom cable personally I think it looks like it could be standard and it shifts really well. The stainless exhaust system that came on the van wasn’t complete and in fact wasn’t even fitted in the strictest sense of the word so after that fell off I bought some 2.5″ steel sections a couple of flowmaster boxes and welded up a custom exhaust, it currently sits low and I need to change the manifolds in order to lift it but that can wait until there are a few less important jobs to do. After that I had to solve some major overheating, massive oil leaks, running problems, I’ve replaced the carb, had electrical issues and various other teething problems that you’d expect from a 54 year old van that’s been sat for years however I now have a safely converted V8 Econoline.

It goes like stink and drives beautifully, I’ve been putting some miles on it and loving it. Theres still lots to be done but I’m finally getting somewhere.

Over the last few months I’ve tackled a few outstanding issues, it all started when I discovered a leak in the radiator which turned out to be bent and in need of a total rebuild, at a quarter of the cost to rebuild I decided to install a 4 core aluminium Mustang radiator, this is marginally shorter than the stock one but 4 core and mounts from the opposite side. Seeing as the original radiator bracket had been hacked up by someone in the past I fabricated a front mounted bracket for the new rad.

During this process I swapped the thermostat housing for one with a fan switch and whilst tightening it discovered that the whole engine slid 75mm from left the right as the previous owner hadn’t actually made the engine mounts correctly as they had to come off I decided that I would also look at the level of the engine as i knew it wasnt 100% flat at the carb plane whilst on the road.

I fabricated a new one up from box section and fitted it back on the original mounts as it should be.

While the doghouse was out i also decided to convert the distributor back to original (although with electronic ignition) and bin the HEI setup, i treated it to new leads and original rocker covers aswell.

Before i put it all back together I decided that it was time i finished the doghouse properly, having received a donor from the states I grafted the two together, it still needs filnishing and painting but it will be done shortly.